Why to choose Uruguay

A best kept celebrity secret for years for stars such as Pamela Anderson, and Naomi Campbell, Ralph Lauren, Punta del Este is usually referred to as the “Pearl” of Uruguay for its miles of beautiful beaches, its upscale visitors, and exclusivity.  Just an hour and a half by car from Montevideo (capital city of Uruguay) and once known to sailors and fisherman as Cabo Santa María, Punta del Este is now known for its miles of beautiful beaches,natural attractions, luxury hotels and restaurants, and glittery nightlife.

The summer from December to March, is the best time to enjoy the pristine beaches; Manatiales, José Ignacio, season, Piriapolis and specially:  La Barra de Maldonado, a beautiful inlet that flows from the black bay area of Maldonado out to the Atlantic Ocean (see photo below).So just relax and enjoy the beaches and stroll along the main avenue:  “Gorlero”  and finish your your walk in a relaxing Cafe right in front of the harbour.

Punta ¡ is the vacation spot in southern Uruguay, placed southeast of the county of Maldonado. Despite the fact that the town has an estimated population of  only 100.000 round the year, the summer tourist boom often boosts the population to more than 1.5 million people between December and March.

The city is also internationally known, among other things as the most important and exclusive resort of South America.

The very first Europeans to arrive in what is now Punta del Este, were the Spanish at the beginning of the 16th century. However, the colonization of this area actually started around Maldonado at the end of the 18th century due to Portuguese expansionism. Punta del Este and its surroundings (Maldonado and Punta Ballena for example) at the end of the 19th century were kilometers of simply sand and dunes, but in 1896 Mr. Lussich bought 4500 acres (aprox)  of isolated land and started a fantastic botanic garden where he planted trees and plants from all over the world.

Later those trees started to spread by their own, now the area know as the “Arboretum”  which is full mostly of many species such as Pines, Eucalyptus, Acacias and  bushes (Quite similar to Australian flora).

Punta Del Este has hosted important Latin American summits such as the one in 1967 attended by  the american President Lyndon B. Johnson.In September 1986, Punta, played host to the start of the Uruguay Round of international trade negotiations.

Origins of the population

The  majority of the population of Uruguay is of European descent.

These percentages simply show that there is some part Europe in Uruguay.

The city is a land of old lineage, an expression of  colonial architecture that deserves to be known, since the modern architecture contrasts with the special local colonial architecture. Today, it has a scenic shore, the kind of houses typical of the resorts, really modern buildings, a port with structure and mooring capacity, well-known trademark stores, restaurants, pubs, etc. It has several big and sumptuous houses called:“chalets”,and gardens lined with plantsfrom manypart of the world, wide and new avenues,

boulevards, careful layout and a very good quality of life that is difficult to find in other South American cities.

Aereal view of the Peninsula

Due to its location, Punta del Este has scenic coasts and beaches. There are two types of coast: “La Brava and La Mansa”. This shows the end of the Rio de la Plata (River Plate) on one side and the beginning of the Atlantic Ocean, on the other side. Every beach of the peninsula has public access. There are quiet and calm water beaches while others have strong waves, white and fine sand or thick and golden ones.

La Barra is popular for nautical sports, fashion parades and sportive fishing. Ahead you can  find different places such as “El Tesoro” resort, Montoya beach, Bikini beach and Manantiales beach, among others. Nowadays this area has become a very  important touristic center with many services according to the visitors needs. 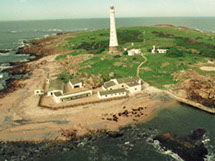 This lighthouse was built on the 17 of November of 1860 by Mr. Tomas Libarona with the intention of being a guide for navigators over the Atlantic Ocean and de la Plata river. It was built with a mixture of volcanic soil from Rome, which is known to be harder than concrete. May be this is the reason why it is still in such good condition. The lighthouse is 45 mts tall and the crystal panels which are part of its illumination system where brought from Europe,  (France)  works by electricity and in case of emergency it uses acetylene gas. It is possible to climb it up through its 150 steps of its spiral stair. 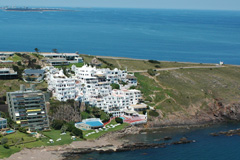 This icon of Punta del Este is a piece of art done by the Uruguayan painter and sculptor Carlos Páez Vilaró, with its unique architecture, Casa Pueblo sits atop Punta Ballena, as one of the main attractions of the peninsula.

Its spontaneous construction took 36 years to be completed.

It is universally considered as a “living sculpture”. Inside this masterpiece there are many rooms facing the sea.

It also boasts sculptures, paintings and ceramics made by its creator. During the summer season a must see attraction are the sunset classical music concerts, definitely an unforgettableexperience.

This is one of the features that makes Punta unique as few continental places offer the opportunity to whatch the sun rising and setting over the sea, you can contemplate the sunrise over the Atlantic ocean, and the sunset over the River Plate in Punta Ballena. 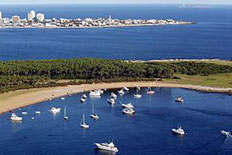 This island of 21 hectares of surface is daily visited to enjoy the nature, its two beaches, Garden Port and Honda beach. The island, as a natural port “cares” all the ships which anchor close to it, besides, it is a popular area to practice water sports. Today there are hundreds of pine trees because of the plantations that the engineer Romulo Rubbo made, his work was later continued by his daughter the engineer Selva Rubbo.

Uruguay has traditionally been better off than many other countries in South America, and is known for its advanced education and social security systems and liberal laws governing social issues such as divorce.

It was among the first nations in Latin America to establish a welfare state, maintained through relatively high taxes on industry. The system, which had increasingly strained state finances, was reformed in the 1990s. 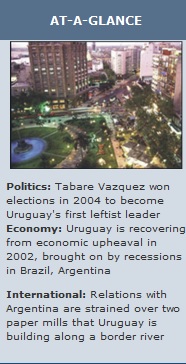 Colonial towns, beach resorts and a year-round mild climate have contributed to a growing tourist industry. The economy has also benefited from offshore banking.

But a dependence on livestock and related exports has left Uruguay vulnerable to ups and downs in world commodity prices. Recessions in Brazil and Argentina - its main export markets and sources of tourists - propelled the country into economic crisis in 2002.

Payouts from the International Monetary Fund (IMF) and a restructuring of foreign debt encouraged a fragile recovery. But the recession left many Uruguayans living in poverty and prompted thousands of younger people to leave.

Most Uruguayans are of European origin - chiefly Spanish and Italian. The country has a large middle class and is largely free of serious income inequality. But the minority who are of African or mixed European-indigenous descent form a higher proportion of its poorest people.

In the 19th century Uruguay's newly-won independence was followed by a prolonged and ruinous conflict between two political factions - the land-owning Blancos (whites) and the urban Colorados (reds).

More recently, Marxist Tupamaro urban guerrillas waged a campaign against the establishment in the 1960s and Uruguay suffered repressive military rule between 1973 and 1985.

Economy: Uruguay is recovering from economic upheaval in 2002, brought on by recessions in Brazil, Argentina

International: Relations with Argentina are strained over two paper mills that Uruguay is building along a border river

His win was part of a regional trend which had seen the emergence of left-wing governments in Brazil, Venezuela, Chile and Argentina.

Mr Vazquez, a cancer specialist and a former mayor of Montevideo, said he would pursue a moderate political course, with the emphasis on alleviating poverty.

On taking office he announced a $100m emergency plan to help the poor and promised an investigation into the disappearances of opponents of the military dictatorship in the 1970s and 1980s.

He also restored diplomatic ties with Cuba. Relations had been broken after a war of words between the Cuban leader and Mr Vazquez's predecessor, Jorge Batlle.

Public anger over the 2002 economic crisis, and disenchantment with free-market economic policies, were said to have contributed to Uruguay's dramatic political shift.

The centrist Batlle government pushed through controversial reforms, including privatisations and the outsourcing of some public services to the private sector.

Uruguayans have access to a wide range of political views via more than 100 private daily and weekly newspapers, more than 100 radio stations and some 20 television channels. Cable TV is widely available.

State-run radio and TV are operated by the official broadcasting service, SODRE. Some newspapers are owned by, or linked to, the main political parties.

Freedom of speech and media are guaranteed by the constitution, with qualifications for inciting violence or "insulting the nation". Rights body Reporters Without Borders noted in 2008 that Uruguay was free from the "media polarisation" seen across much of the continent, scoring highly in press freedom rankings. 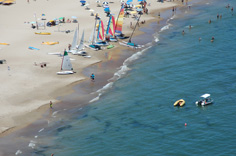 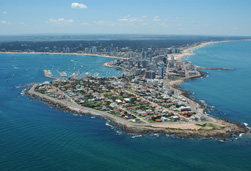 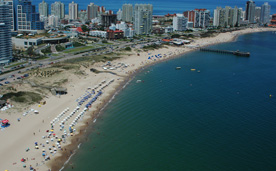